Russian tour of the Swedish project Sheik Anorak starts on September, 19. For this wonderful event Noisy Forecast released a cassette with two EPs of the musician – “GBG1” and “GBG2”. Urgently look for a concert date in your city! Tapes will be available for purchase from us or during the show!

Sheik Anorak is a one man band lead by Frank Garcia, a French musician now relocated in Göteborg, Sweden. Sheik Anorak’s music is a wide range of all Frank’s influences – from minimal techno to indie pop, from krautrock to noise. His music is quite hard to categorize. After several EPs and full lengths, Sheik Anorak has developed through the years his own style and sound. The peculiarity of his performances is an incredibly wide range of instruments for a group of one member: electric guitar, drum kit, electronics and effects.

Ahead of the tour, we asked Frank a few questions:

In your opinion, what is the difference between GBG1 and GBG2?
The main differences between GBG1 and GBG2 are mainly the guitars and melodies. GBG1 is more rock/pop with some guitars and melodies and also more vocals, GBG1 is the light. GBG2 is colder, without guitars and only a few melodic parts. It’s more about repetitions and tranсe/dance, GBG2 is the dark. I guess the main factor that made me change direction is the pleasure to play those tracks live. Even if it is darker, i have more fun playing the repetitive and cold tracks of GBG2.

GBG? What does it mean?
It’s a short version to write Göteborg : GöteBorG
People in Sweden use it when they write. Stockholm is STHM, Copenhagen CPH, etc.

Can you tell us a little bit about the Swedish music scene?
It’s a very interesting music scene indeed. There’s a lot of bands that make great music for sure. It’s really well organised, really professional! I know many organisations that are here to help bands and artists and have fundings for it, which is a good thing. In the other hand there’s not so many people doing DIY stuff. I mean there is some of course, like everywhere but i have the feeling it’s way less than South or Eastern Europe for example.
When it comes to the music itself, the genre is mainly rock or rap, like many countries. And where i live, in Göteborg, it’s mainly rock/folk/singer songwriter…not really easy to find my place there but it’s doable and nice anyway.

Here’s some bands or artists from Sweden that are great, according to me (not everyone have to agree with this): Anna Von Hausswolf, Erik Lundin, Ljung, Meshugghah, Säkert, Yung Lean, Refused, etc.

Do you listen to any Russian musicians? Which ones do you like?
I don’t know many russian bands but i know and like Euglena, Fanny Kaplan, Kedr Livanskiy, Shortparis, ФРАКИ, etc. I would love to discover more music from Russia!

Can you describe the portrait of your listener, what kind of person are these people?
It has changed through the years. In the beginning of Sheik Anorak it was more noise rock. So the audience was mainly guys in their 20 or 30’s who listen only that kind of music. And then my music changed slightly and became more pop, more melodic. So i lost a part of this audience because it looks like melody is bad haha!
But i reached a younger and more mixed audience, younger and more girls and women. Now that i changed a bit again it’s even wider. I talked with people after the show (or before) and i love to hear the comments and inputs. And i realized my audience listens to all sort of music, like me. I met young guys from suburbs who were super into Hip Hop that liked my music. Some hipsters from Berlin who like minimal techno and enjoyed my music too. Some metalheads in Germany that liked the energy and the trance of my tracks. And still the people who like melodies and those who are more into radical stuff. You got it, my listeners are usually open minded.

What is the most unusual place where you are performed?
I played a couple of boats (in France, Germany, Netherlands…), and i played in a bunker once and another time on a beach. All those experiences were great. But i like every places, i also enjoy clubs and bars too!

This is not your first visit to Russia, how was it then? What do you expect now?
My first visit in Russia was actually with my black/death metal band Neige Morte 3 or 4 years ago. It was so great that i wanted to come back with my solo project Sheik Anorak. So last year i did a 8 days tour on my own. It was even better than what i was expected. All the people i met at the shows, the audience, bands, everyone was so nice. I kept contact with some people in every cities i visited and i’m looking forward to go back and see them again. I don’t expect much this time, i already know it’s gonna be great! I’m gonna meet some new people and have even more fun. 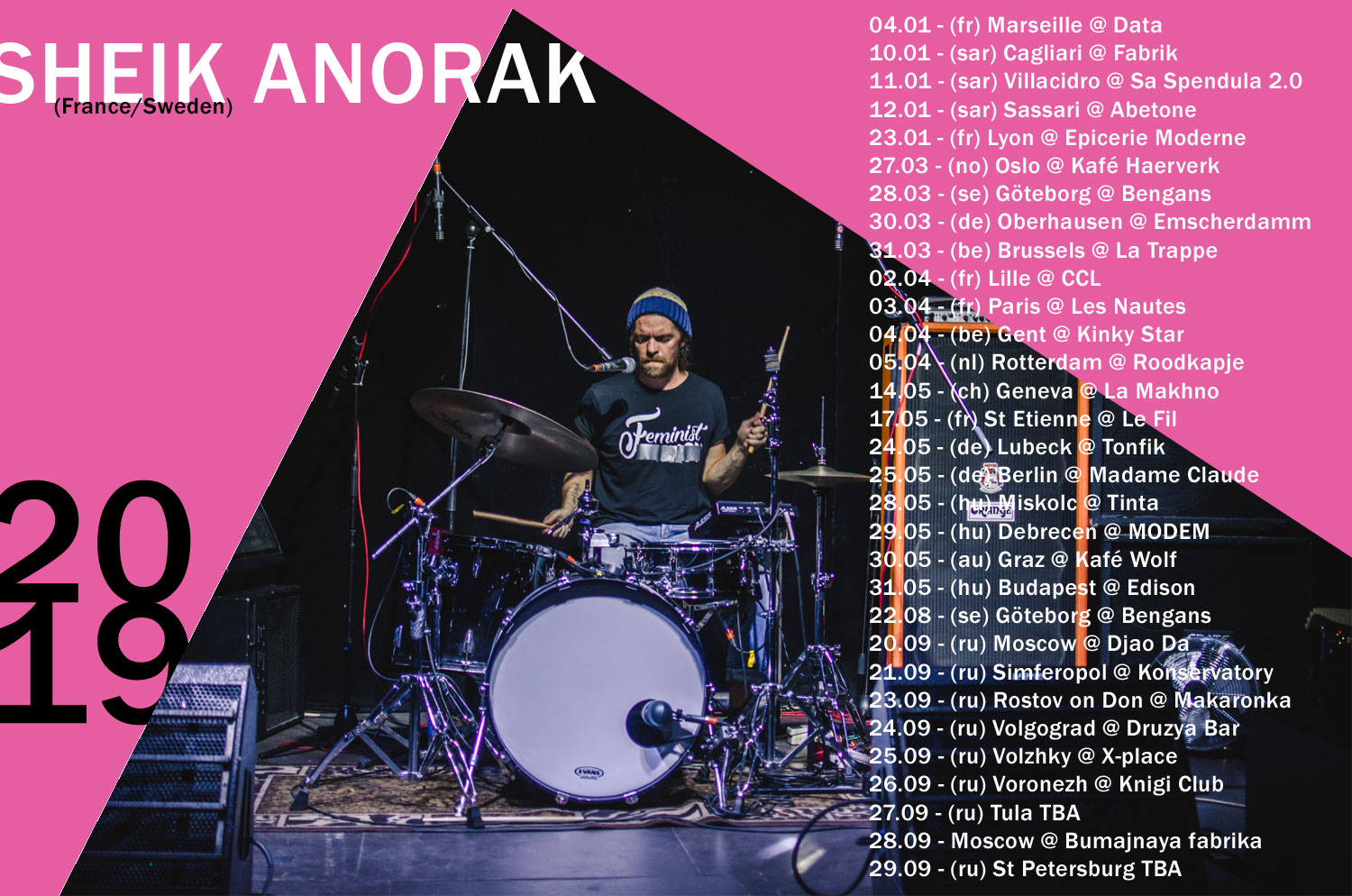